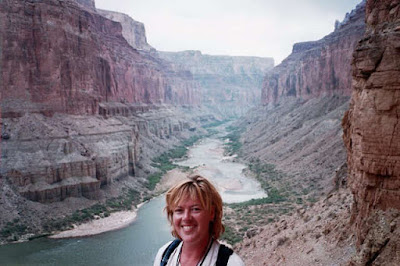 When I was 23, my boyfriend and I planned a climbing trip to Ecuador for the winter. We were going to put our stuff into storage, get on a plane, and scale volcanoes for three months. We had plane tickets and everything. Expensive ones.

Then, in early December, I got a phone call from someone at Grand Canyon National Park asking me to go out and be a ranger there starting in less than a month. For some reason, I accepted the offer even though I had those other big plans. And my boyfriend said he would go with me.

I only spent one season working at the Canyon because I didn't like working for the park service, but I fell deeply in love with the landscape there, and it became a touchstone for me. I have gone back countless times, I have led backpacking trips through the canyon, and I even rafted the canyon for my honeymoon.

My season at the canyon also catalyzed my search for my biological parents in an interesting way that I am working to recount in a book about wilderness and adoption search and reunion. It has become immensely important to my identity and well-being.
Posted by Andrea at 2:11 PM 2 comments:

Between May 20th, the day I was born, and June 12th, the day I was adopted, I was in "foster care." I don't know how many families I lived with during those three weeks, or who they were, or how they "parented" me, or why they would take a tiny newborn baby into their home(s) for a few weeks and then gave her away.

It is so weird to think about that three week period, and I'm really thinking about it right now. I hate it. What a stupid, stupid idea, to needlessly shuffle a newborn around from home to home, from caregiver to caregiver three--or more--times in her first three weeks of life.

the end of May and beginning of June is always hard for me. I feel so at sea.
Posted by Andrea at 11:46 PM 5 comments:

What if the Universe is on Our Side?


Suppose the molecular changes taking place
In the mind during the act of praise
Resulted in an emanation rising into space.
Suppose that emanation went forth
In the configuration of its occasion:
For instance, the design of rain pocks
On the lake’s surface or the blue depths
Of the canyon with its horizontal cedars stunted.

Suppose praise had physical properties
And actually endured? What if the pattern
Of its disturbances rose beyond the atmosphere,
Becoming a permanent outline implanted in the cosmos—
The sound of the celebratory banjo or horn
Lodging near the third star of Orion’s belt;
Or to the east of the Pleiades, an atomic
Disarrangement of the words,
“How particular, the pod-eyed hermit crab
And his prickly orange legs”?

Suppose benevolent praise,
Coming into being by our will,
Had a separate existence, its purple or azure light
Gathering in the upper reaches, affecting
The aura of morning haze over autumn fields,
Or causing a perturbation in the mode of an asteroid.
What if praise and its emanation
Were necessary catalysts to the harmonious
Expansion of the void? Suppose, for the prosperous
Welfare of the universe, there were an element
Of need involved.
—Pattiann Rogers (from Firekeeper: New & Selected Poems)
Posted by Andrea at 9:48 PM 3 comments:

Back from the Land of Superbob

It was like living in a little nest with my parents.

How to explain this?

They are currently living in a small apartment across the street from the Stanford Medical Center.

It was very peaceful having few real world distractions and performing tangible tasks--so very unlike my usual life in which everything feels scattered and difficult to quantify.

By the end of the week, my dad was definitely doing better than he was when I arrived. He was walking a little faster, feeling less nauseous, and smiling a little more. It was a quantifiable improvement, even though he's still very sick.

And I felt sad to climb out of that little nest in which the most important thing--really the only thing--to do was to care for one another.

The Return of Superbob 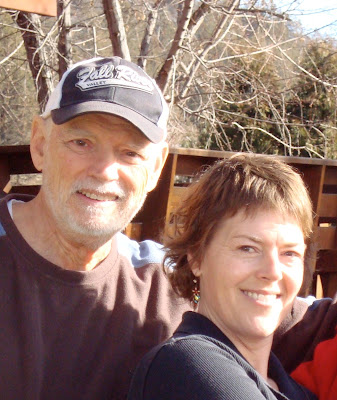 Superbob is out of the hospital!

Thanks to everyone who has been keeping him in their thoughts.

I am with him now, helping my mom with his 'round the clock care, and I'm so happy to be here.

He still has to go to the hospital every day, but the fact that he no longer resides in the hospital means he is getting better.

Tonight I sat at his feet and clipped his toenails for him, then massaged lotion into his dry and swollen feet and ankles.

I felt grace in the room.

Superbob has rescued me so many times from so many bad decisions and bad situations, and he's not the kind of guy who ever really lets anyone do anything for him, so to be able to help him a little felt very rare and wonderful.
Posted by Andrea at 2:04 AM 6 comments: