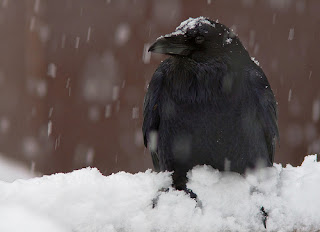 This is a fake legend. I wrote it to try to portray the feeling that many adoptees have that they are not fully human because they aren't allowed to know their true origins.

Sometimes, we invent our origins.

The stanzas written in regular lettering are meant to represent someone telling a story, the italics indicate where the storyteller is spinning a tall tale.

Crouched on a shale slope, she peered

from between yucca spears

to watch them toboggan down snow patches

on their black-feathered asses; she muffled

her laugh when they snacked on snow-clods.

the sounds of water pouring into a canteen,

a hasp settling into place.

But what she loved most

was the way ravens loved: in mid-air.

her sweetheart was a rock-climber.

He spent each free moment pressed

to canyon walls, while she loved the air’s caress.

Some swore she jumped.

She tumbled over the rim

Black feathers crowed across her face in love—free-fall, a mile.

They twirled, iridescent, and then swept upward.

Now, in a pile of raven’s down,

around the world, calling.