Check out what ReadingWritingLiving is posting about how adoption is treated on the TV show, Mad Men.
Posted by Andrea at 9:21 AM No comments:

Email ThisBlogThis!Share to TwitterShare to FacebookShare to Pinterest
Labels: Mad Men TV adoption in the media

A New Low In Reality Television 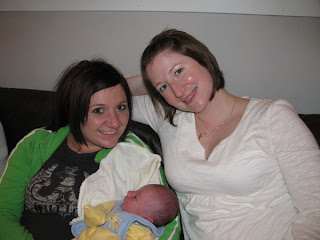 ﻿
(this is a still from the one I'm watching right now.)

...or is it a documentary? I'm referring to the new television series "Adoption Diaries," an episode of which I am watching right now. I'm a bit flabbergasted by the show's goal to condense the entire length of a pregnancy, an adoption application process, and the placement of a baby with an adoptive family into one half-hour segment. It's so short, in fact, they throw in another segment of another adoption process just to make the program last a whole hour.

So one adoption isn't worth even one hour on television? What is the takeaway message from this show, then? It's all neat and tidy and wrap-up-able in thirty minutes?

They do show some of the uncertainty and sadness that the birthmothers feel, but the show definitely seems slanted toward the experience of the adopting family.

The whole thing seems really gross and exploitive to me. UGH.

This just in: I just watched a commercial about the show that comes on AFTER "Adoption Diaries" . It's called "The Locator," and it's about--you guessed it--a guy who helps family members reunite after they've been separated for decades by adoption and other such situations.
Unbelievable. Really, now.
Posted by Andrea at 10:22 PM 2 comments:

Email ThisBlogThis!Share to TwitterShare to FacebookShare to Pinterest
Labels: adoption in the media, adoption on TV, adoptive parents, birth mothers

What does original identity mean to you? Check out this Adoptee rights video on youtube; it's very moving. Footage from the July 2009 adoptee rights protest in Philadelphia.
Posted by Andrea at 9:59 PM 3 comments:

Well, Here's One Way to Search I Never Thought About

A biological dad of a 19 year old girl, who was recently informed of his paternity, is searching for his lost daughter via...ebay! Check out his auction here.
What do you make of this approach??
Posted by Andrea at 9:39 PM No comments:

Anyone out there checking out the adoption-themed social networking site, Adoption Voices? I recently joined, and would love to hear your opinions about it.
Posted by Andrea at 11:24 AM 4 comments: