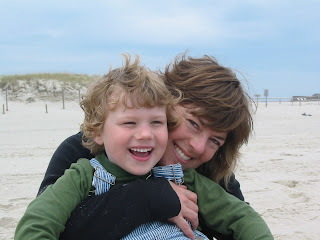 Last night I met a woman who was a friend of next-door-neighbor. The two of them were chatting in the hallway of a venue of an event we were all attending, and I introduced myself; I said, "Hi, I'm Andrea." She said, "Hi, I'm Marissa. I work at the preschool. You have a child who used to attend the preschool, don't you?" I said "Yes," and asked how she knew that.
Here's the clincher:
She said, "I have seen pictures of him at the school, and I recognize him in the features of your face."

She couldn't have said anything more profoundly gratifying to me. No one could have.
Adoptees want to look like their family. And we don't get to until/unless we have our own children.
I'm so grateful I have my son.

In the words of the venerable Nancy Verrier:
Growing up in a family where they are not reflected back is a tremendously difficult experience [for adoptees]. A great deal of an adopted child's energy is used in trying to figure out how to be in the adoptive family. It is important to an adoptee to have the opportunity of experiencing that reflection: the tilt of the head, the quirk of the smile, the pace of the gait, not to mention the more obvious aspects of physical similarities or of talents, aptitudes, and interests.
Posted by Andrea at 9:48 PM 9 comments:

How many times have we adoptees filled in the blank about why, oh why, oh why we were given up?

I just read this little article at the Adoptive Families Magazine website in which a social worker explains that it's important that adopted children get to make their own "lifebook" or scrapbook so they can express their feelings and ideas about being adopted and so that their adoptive parents can witness those feelings and ideas.

Let me just say: we have come a long way, baby. Doing something like this was so far off anyone's radar screen when I was a little adopted kid. I wish I had been guided as a child to express some of the fear, confusion, and guilt I felt as an adoptee. Instead those feelings had nowhere to go and so instead they got stuffed away somewhere and have been seeping out for decades in everything I've written and all over every relationship I've been in.

So, kudos to you, social workers who encourage adoptive parents help their their adopted children do this emotional work, kudos to the parents who have the guts to do it, and most of all, blessings on the forthcoming generations of adoptees who may grow up with the ability to name, expose, and dissipate the shame, guilt, and fear associated with being adopted.
Posted by Andrea at 9:18 PM 4 comments: