"Double Vision" went live today!
I'm very excited and honored to have my work featured on The Dirtbag Diaries podcast! It's been my favorite podcast since I found it about two years ago--I admired the quality of the writing, production, and entertainment value of their episodes. One day, as I was walking my dog along the greenbelt with my friend Robin, I told her about the Dirtbag Diaries, how much  I liked it, and she said, "Maybe you should write for them!"

Well, it's happened. Here it is; I would love it if you could take 15 minutes and listen to it. I'm so excited! My essay, "Double Vision," on The Dirtbag diaries Podcast.

Here are a few pictures taken around the time this story takes place: 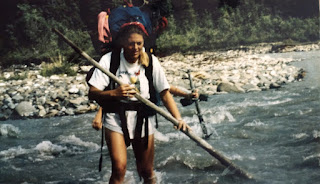 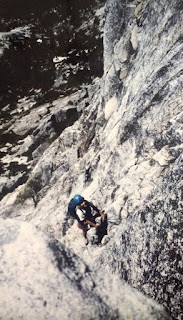 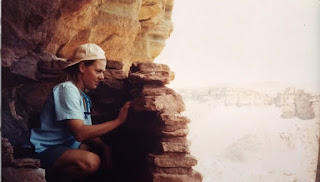 Hiking on a day off from rangering duties at Grand Canyon, 1991
Posted by Andrea at 2:16 PM No comments:

Beginning of My Report on Berlin 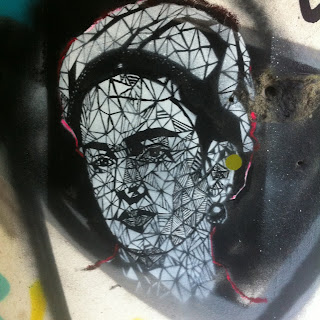 Frida: fractured and beautiful, as always

Here's what I've been up to: exploring the lesser-known corners of Berlin! And thinking about social justice, and freedom, and patriotism, and the evils of nationalism, and the U.S. involement in all kinds of things it should and shouldn't be involved in. The above art of Frida Kahlo is a photo I took at Teufelsberg, a graffiti "gallery" that inhabits the remains of a CIA spy tower built on a hill that is composed of the rubble of destroyed buildings from World War II. In other words: an art gallery built on the rubble of the Cold War, which is built on top of the rubble of World War lI. In a nutshell, Berlin. 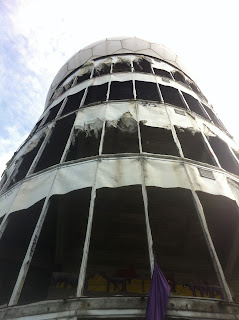 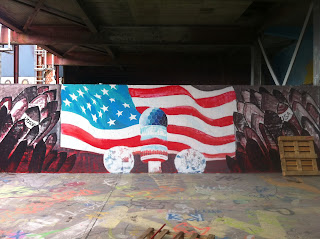 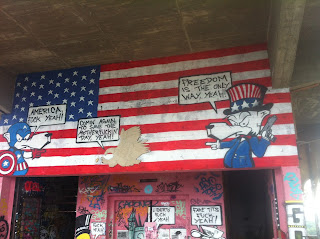 As I mentioned, I've been thinking about patriotism a lot too these days, given our current political situation. Here's an essay I wrote for the July 4th holiday, but it seems appropriate to post it here now as well, after witnessing the art at Teufelsberg:

Lineage and Independence Day
As I spread my dad’s ashes on the graves of his revolutionary war ancestors, I found a star-shaped medal at each gravesite, placed there by the Sons of the American Revolution. Each star point declared a value: to love justice, to be sincere and open-hearted, to suffer persecution. Like his ancestors, my dad was sincere and open-hearted, and he loved justice, to be sure. While as a lefty-liberal Political Science professor, he had suffered little persecution, I suffered persecution because of his heritage.
One day, when I was a junior in high school, I was summoned to my guidance counselor's office.
Smiling brightly, Mrs. Simic said, "Andrea, you've been nominated by the DAR to apply for a college scholarship!"
"What's the DAR?” I asked. I had never heard of it.
"The Daughters of the American Revolution! You are one! You have an ancestor who was a patriot. That's how you got nominated for this scholarship—but you have to take a test to compete for it."
I took the test, which asked about patriotic things: who wrote “The Star-Spangled Banner” and the like. But I never learned my score because of what happened next.
Mrs. Simic called me at home. "I'm so sorry," she said, "but you're ineligible for the scholarship."
"I failed the test?" I asked.
She hesitated a bit. "No, it wasn't that. You're adopted, correct?"
"Yes…" I wondered how she knew.
“The DAR is a lineage organization. Its membership is limited to direct lineal descendants of revolutionary patriots. They looked up your birth certificate and noticed that it’s amended—it’s an adoption birth certificate."
At that point in my life, I didn't know what the DAR had tried to do to Marian Anderson in 1939. I only knew they had claimed me as one of them and were offering college funds, which I needed. And now I learned that because I was adopted, they had rejected me. Looking back, I wonder if my dad never told me about his family’s connection to the DAR because he knew they wouldn’t accept me— and he despised that kind of injustice.
Confused, I asked, "I'm DQed from the scholarship because I'm adopted?"
"I'm afraid so. I'm sorry."
I was adopted in 1967, when the attitude toward adoption was this: if adoptive parents treated the adopted child as their own, the child would magically become theirs. That way, the fact of adoption could be ignored, the birth-family would cease to exist, and it would all be for the best. It was the stick-your-fingers-in-your-ears-and-sing, “LA-LA-LA-LA-I can't-hear-you" approach to adoption. No information about the birth-family was given to the adopted person, and vice versa. Adopted people like me grew up feeling they should only identify with one family, so I identified as a Ross—until the DAR told me that I wasn't. I didn’t belong to the family who had raised me. But neither did I feel I was of the family I'd been born to: I was not legally allowed to know who they were.
My son, too, grew up hearing our Ross family lore of coming to this country and fighting for freedom. He loves history, and he loves that he has revolutionary ancestors. George Ross, his great-great-great-great-uncle signed the Declaration of Independence. He claims the Rosses as his, as he should. And he, too, suffered the same kind of rejection I did: recently, at a revolutionary war reenactment, he excitedly talked to a man recruiting for Sons of the American Revolution. My husband started helping our son with the application, but on its front page: “we accept men with a lineal connection to an ancestor who provided service to the cause of American Independence.” Our son wasn’t qualified. He was crushed. And I was at a loss to explain to him that he's not "really" a Ross, even though he bears their appellation and they are the only ancestors he knows.

Sometimes things change: most DAR scholarships are now open to non-members. And many open adoptions take place now—every family member has the right to know the others.
Sometimes things don’t change: those organizations still don’t consider us members of our own family. And I still don’t have the legal right to see my own birth certificate.
This is a reminder that, while we may have learned from past mistakes and taken steps to make amends, as the DAR attempted with Marian Anderson, the fight for justice and equality must continue. Given our country’s current political climate and the pursuant rise in nationalism and bigotry, we must recall the patriotic principles of open-heartedness, tolerance, justice, and equality that American revolutionaries and their forbears sought when immigrating here. On this Independence Day, we must remember our country’s battles by working for acceptance and egalitarianism.