Have you read Missing Sisters by Gregory Maguire?

I just ordered it. Let me know what you think if you've read it--I'll check in once I'm finished with it. And p.s. Happy New year!!

Affectionate humor and a particularly well-defined setting lend distinction to this touching novel set in 1968. Alice, a 12-year-old beset by hearing and speech impediments, lives in an orphanage run by nuns in upstate New York. After Sister Vincent de Paul, Alice's closest friend and supporter, is severely injured in a fire, no one explains to Alice that the sister has been sent for a long stay in a nursing home. Alice, worrying that Sister Vincent has died, makes a pact with God: until she knows that Sister Vincent will recover, she won't even consider an offer of adoption that has been extended to her--her first. A girl Alice despises gets her place, but Alice has a drama of her own, inadvertently learning that she may have a twin sister. With a mixture of cunning and courage, Alice finds her. Maguire, who spent some of his childhood in a Catholic children's home, avoids pat and obvious resolutions, and he conveys Alice's faith lightly but substantively. Characterizations of the Catholic environment are sharp and funny. Some poignant, genuinely suspenseful moments express, among other truths, the value of individuality. Ages 10-14.
Copyright 1994 Reed Business Information, Inc.

Grade 5-7-A portrait of a 12-year-old handicapped girl, raised by a stern group of nuns, emerges from this ragged novel. Alice has spent her life in an orphanage, steeped in rigid religiousness and-because of her hearing and speech impediments-in confusion. When the one nun who is sensitive to Alice tragically vanishes from her life, the girl's isolation is compounded by grief. Then, through a fluke of mistaken identity, she discovers that she has an identical twin sister who does not suffer from disabilities and who has a loving, supportive adoptive family. As Alice struggles to find her place, the story struggles to deal with attitudes that seem dated and off-balance without really giving a sense of upstate New York in the 1960s. Supporting characters and issues are left dangling, although Alice, finally, is not; her sudden adoption in the last few pages is abrupt and unsettling. An imperfect book, but an unusual look at Catholic family values and at a troubled child.
Susan Oliver, Tampa-Hillsborough County Public Library System
Copyright 1994 Reed Business Information, Inc.
Posted by Andrea at 7:59 PM No comments: 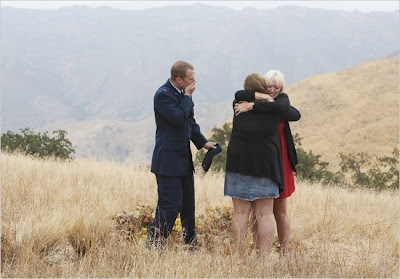 Well, I've already blogged a bit about the TV show "Adoption Diaries" here, and I've Tivoed another show called "Adoption Story," (haven't watched it yet) and, oh, what's this? Yet another adoption-related television show? And this one is brought to us by one of the big networks? Yes, I speak of "Find my Family." (See photo, above.)

Have you seen this show? It presents almost-real-time searches and reunions, wherein adopted people get help from the show's "experts" to search for their biological parents, and birth parents get help to search for their long-lost offspring. It's another example of exploitative television, showing the anguish of the search and the bittersweet emotions of reunions after decades of separation. It tugs at our heartstrings, especially if we are people who have been intimately affected by adoption, and especially especially if we have conducted our own searches ourselves and are figuring out how to live in reunion.

The New York Times published this article about it on Monday. In the article, someone who works at an adoption advocacy website (and who mentions that she "supports efforts to allow adoptees and birth parents to exchange medical information," so I have to surmise that she is NOT in favor of full reunions) accurately observes that "anytime you film somebody in real time having an emotional breakdown, that is exploitative." I agree with her on that point.

However, others who were interviewed, including an advocate for birth mothers, see some potential benefits of airing the program; to wit, FirstMotherForum.com author Lorraine Dusky said "Maybe this will be heard by people who think it is unloyal somehow for a person to search out his or her roots, parents, family, when it is a most natural desire of consciousness." I see her point, but I still believe it's exploitative.

However, the most burning question for me about all this is WHAT IS GOING ON HERE? Never before in my life have I seen so much spotlighting on issues of adoption, especially on search and reunion. I totally agree that as homosapiens, we have a primal need to know our origins in order to feel completely human, and I also believe that we adoptees have a basic human right to the information that is ours. But why is all this suddenly coming into the limelight? We have lived in silence, anonymity, shame, and doubt ("Is this really the big deal it feels like? Why doesn't anyone else except my therapist think so?")

What has shifted in our culture that has begun to train the spotlight on all issues adoption? I don't think it's the mere fact that adoption is occurring more and more often in the United States, and I don't think that it's just because our society is now much more accepting of people being born in situations outside of marriage. It's something else.