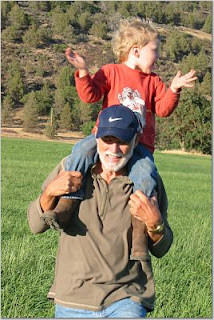 Pictured here: my awesome dad, Bob, carrying my little son in an ad for Nike. (No not really--not the Nike part, I mean.)

I have known my dad, Bob, since I was three weeks old, and he has always been amazing to both my brothers and me. He is so excellent that I long ago dubbed him SuperBob, in celebration of his Super Dadly powers.

SuperBob has helped me out of sticky situations so many times, I can't remember them all. Some of them I wish I could forget, because I'm embarrassed to have gotten into them in the first place, but SuperBob was always there to show me how to pick up the pieces and go home. (Like the winter I decided to move to Flagstaff, Arizona to live with my boyfriend, and I packed up all my stuff in the back of a big old white pickup truck and the boyfriend and I drove all the way from northern California to northern Arizona. Correction: my boyfriend drove us all the way because, having been in a bad car accident less than a year before while attempting to drive home from Alaska, I was too scared to drive the humongous truck that was not only full of stuff, it had the stiffest clutch I've ever tried to engage. You can probably see this coming, but on we go: I had only been in Flagstaff a few days before I knew it wasn't going to work for me to stay there. Not a healthy relationship. I knew I had to get back home to California, but I was trapped--I couldn't drive that truck back across the desert by myself, no way, no how. So who came to my rescue? SuperBob, of course. He got on a flight to Flagstaff, picked me up, and drove me the 850 miles back to California in the big, white pickup truck, never once berating me or making me feel like a total loser for not looking before I leapt, or anything. He just treated me to dinner at the Sizzler in Barstow [that's about as good as it gets in Barstow, by the way], and hugged me while I cried about my broken relationship with the boyfriend.) SuperBob is a really good guy.

Fast forward a couple of decades to last summer, yes, less than a year ago, when I first met my birthfather, Francis. I contacted Francis via the good old US Postal Service in 2007. When he got he letter, he was shocked--he said he had no idea I existed, but in his hands, he held a long treatise from me, telling him about myself and my family, and a big 8-12" x 11" inkjet-printed color picture of me with my little son , smiling out at him from the abyss. He called me on the phone as soon as he got the letter, and said "I thought I had four children, but now I have five!!" He couldn't have been more welcoming, despite his claim of not knowing I roamed the Earth.(Someone's memory isn't serving him/her: my birthmother claims he knew...but anyway.)

A few weeks later, he sent pictures of himself and his family, and wouldn't you know it, in his high school graduation picture, he looks very, very much like SuperBob. What do you make of that?

So now I have two dads, one who has dealt with me and all my neediness and warts for 42 years, and one who I am just beginning to know.

And both of them are very kind men. 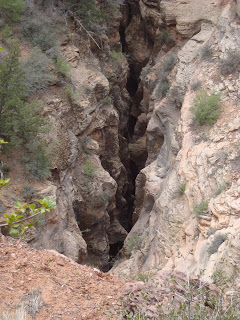 Because the truth
about origins
is built on pillars

of dreams and lies,
and family is built
upon wooden planks

of blind hope, the way
a nest is built in its tree
of presumed potential.

Because a forest is the one
who teaches how to question,

a desert is the one
who embraces,

and a canyon is the one
who knows how to keep.

The ten years I spent searching for my birth parents coincided with the ten years I spent as a wilderness guide, living outdoors or in wild places most of the time. I'm working with this idea (and as you can see by the date on the poem, I've been working with it for quite awhile,) that this coincidence has a deeper meaning--that the need to search and the need to be in the wilderness are intertwined, and that they each inform the other in an important way. The wilderness was my "home base" while I did this scary, nebulous thing called searching for my origins. I found a lot of solace in wilderness, and the poem explores some of the reasons why.

Recently, my smart and lovely friend Tamar directed me to Gerald G. May's book, The Wisdom of Wilderness, in which he writes, " ...The primary meaning of wild is 'natural.' In turn, natural comes from the Latin nasci, meaning 'to be born.' Wilderness, then, is not only the nature you find outdoors. It can also refer to your own true Nature--the You that is closest to your birth. This inner wilderness is the untamed truth of who you really are."

Well, there you have it. Thanks, Gerald G. Mays; you've put elegantly into words what I've been inexpertly gnawing on for a decade.

I'm interested to hear from you, readers, about what wilderness does for you--are you scared of it? Do you love it? Do you feel at peace in it, or nervous? Do you avoid it, or are you drawn to it?
Does it feed you in a deep and synergistic way? If so, please try to tell us about it.
Thanks!
Posted by Andrea at 12:16 PM 2 comments:

Father's Day's just around the corner...

Did any of you listen to This American Life last week? It featured a narrative told by Lennard Davis, author of Go Ask Your Father: One Man's Obsession to Find Himself, His Origins, and the Meaning of Life Through Genetic Testing, which will be published in 2009 by Random House.

Davis isn't an adopted person, a few years ago, after his father died, Davis's uncle told him that he (the uncle) was Davis's biological father.

The meat of the story is about Davis's quest to find out if his uncle's claim is true, and when it becomes clear that the man who raised him is definitely NOT his father, he says he feels "abandoned."

This is the part that caught my ear--feelings of abandonment run so rampant in me, and in many other adoptees, that I'm always trying to figure out how to come to terms with them, how to contextualize them in new ways to understand them better, and in doing so, to drive them away.

So Davis feels abandoned when he finds out his father is not his father, which highlights the fact that keeping secrets from people about their origins almost always leads to more pain than openly sharing the facts from the very beginning would have done.

Anyway, so even though Davis is not an adopted person, he feels abandoned in the same way that many adopted people feel because his parents kept secrets from him about his biological origins.

The reason I bring this up is that so many non-adopted people have a hard time understanding adoptees' feelings of abandonment; they say things like "but you were chosen," or "you were raised by wonderful, loving parents, how could you feel abandoned?" So here you have it, nay-sayers: proof that feelings of abandonment arise from confusion about one's origins, no matter the circumstances.

I'm curious about what you readers think of the "abandonment issues" argument: your thoughts? Comments? Questions? Let's hear them!
Posted by Andrea at 10:27 PM 2 comments:

Hi there, everyone:
Are there any blogs by adoptees, birthparents, or adoptive parents that you read and would recommend? I'm always on the lookout for new ones--the ones I like are found on my "Blogs I like" list. I'd love to read your faves.
Please share!
Posted by Andrea at 9:27 PM 4 comments: